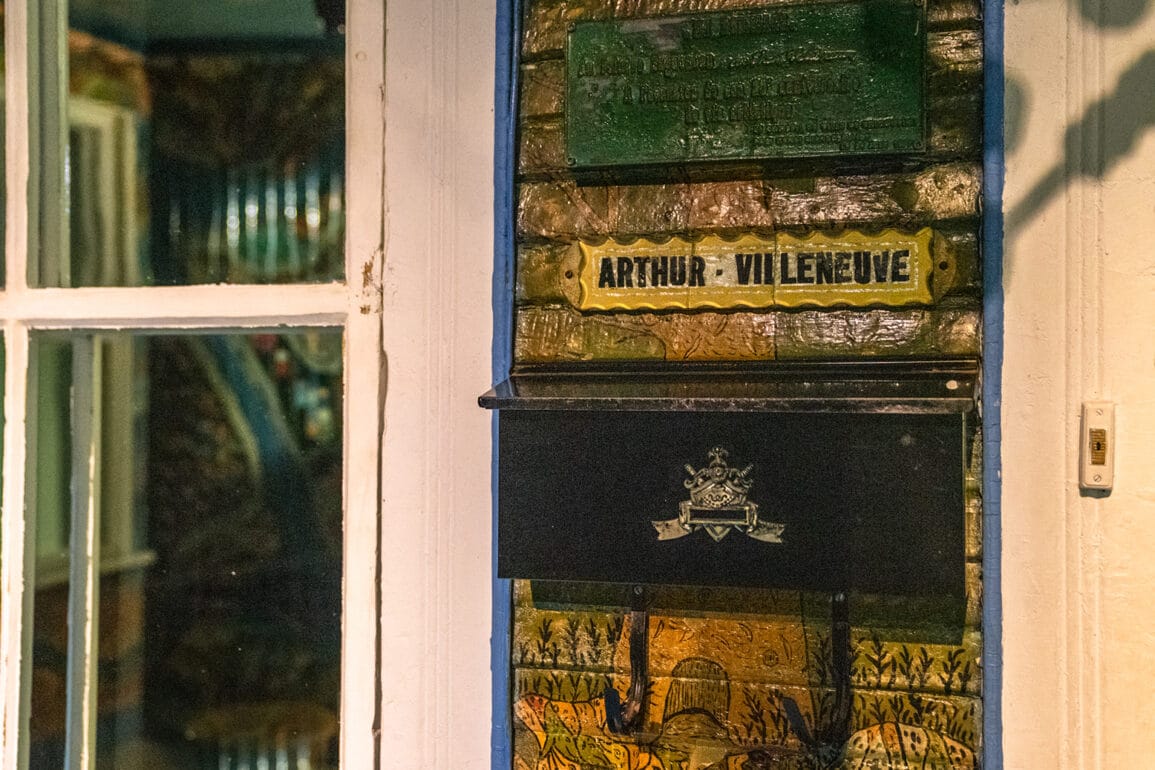 In Saguenay, in the heart of what used to be the city of Chicoutimi, the small houses have become a permanent fixture in the collective imagination. We’re all familiar with the famous little white house, the true hero of the 1996 floods, which, after surviving the deluge, took on a monumental character. It has been preserved and even turned into a museum, right next to the Sacré-Cœur church, a jewel of the region’s built heritage. A few steps away, nestled comfortably in the La Pulperie de Chicoutimi Regional Museum, is another small house, the former home of Arthur Villeneuve and his family. This barber-painter, who started out with very little artistic experience, turned painting into his masterwork, depicting the images of his time and his fascinating vision of the world around him on the inner and outer walls of his home. His unrelenting efforts resulted in a huge volume of work, ultimately earning him top recognition on the artistic scene.

The story began in the Sacré-Cœur church one Sunday in the mid-1950s, when the parish priest delivered a homily on the importance of the Parable of the Talents. In the text from the Gospel of Matthew, the servants are praised for making the gifts they have received from God bear fruit. Back home at 669 Rue Taché, Arthur Villeneuve had a revelation, convinced that he indeed had a talent that he must make known. This epiphany triggered a mystical experience that lead to a major project. In 1957, the first brush strokes were made on the walls of the family home. This was the beginning of an endeavour that lasted almost two years, until the house was entirely covered in colour, except for the master bedroom.

Denise Pedneault, public programs technician at the La Pulperie museum, knows this house by heart, having been around it every day. With admiration, she translated into words the drawings painted on the walls, where it all began. “This first fresco features the Limoilou neighbourhood in Québec City,” she said. “It was a neighbourhood he knew well and where he often visited his family. It’s not to scale, obviously, but you can see the importance he places on neighbourhood life, neighbourhood characters, transportation methods. You can also see the importance, in his mind, of certain buildings and landscape elements like the Château Frontenac and the Rivière Saint-Charles. This is the beginning of his work, which continued to evolve over the years, depicting elements of importance to him. Here, it’s the connection with family that plays a central role.”

From there, it’s a veritable pilgrimage, shaped by Arthur Villeneuve’s inspiration, through the streets of his neighbourhood, from the Hôtel-Dieu de Chicoutimi hospital where he earned his living as a barber, to the Oratoire Saint-Joseph, passing through Sainte-Anne-de-Beaupré and even Saint-Pierre-de-Rome. In amongst these well-known monuments, he chronicled the daily life of his times through illustrations of modest buildings, anonymous workers’ houses, gas stations and log cabins rubbing shoulders in a fascinating mosaic, intertwining abstract vegetation and animal forms. This technique, which he invented and named “continuance,” gave the work as a whole an astonishing continuity.

Dividing his time between his work, his passion for painting and his family life, it took him two years to paint the entire family home, a truly unique work of art. Over the years, he also produced no less than 4,000 paintings and 2,000 drawings. Entering this tiny house where he lived with his wife and four children, one is immediately struck by the intimacy of the home, where you can still smell the oil paint and where the artist’s determination still resonates.

Determination or dedication? One thing is certain, Arthur Villeneuve’s hard work, far from being as naive as one might have thought, triumphed over the taunts and mockery of his neighbours, many of whom considered him an oddball. Completely absorbed in his work, he paid no heed, and turned his house into a major work of art, and it deserved to be showcased… at the museum!

You have to see it to believe it. To ensure that the barber-turned-painter’s artistic achievement lived on, in 1994 the skilled artisans at the La Pulperie museum found a way to preserve the house in its entirety. To honour Villeneuve’s extraordinary creative career, they moved it, in one piece, into the prestigious regional museum in an incredible, posthumous feat.

For Denise Pedneault, it was the fitting outcome of an amazing artistic journey. “Mr. Villeneuve,” she said, “always believed that this house would become a museum. Before his death in 1990, plans to conserve it were being developed, because it is a true jewel. This house depicts the history of the region, of the neighbourhoods, of Québec, and it reflects the influence of religion in the 1950s. He was a chronicler of the times, and his home was recognized as a work that—no question—had to be preserved. The best solution was to move the entire house into the museum. And this was masterfully achieved in 1994. Nothing broke. It certainly was a challenge.”

As you first walk into the huge room where the house now stands, you can immediately see that the operation was a success. Nestled in a quiet place, protected from inclement weather and sunlight, Arthur Villeneuve’s work is now accessible to anyone who wishes to see it. This really was the best possible outcome: the house-museum, a haven for the painter’s dreams, is now protected by the community, which can for the foreseeable future enjoy and appreciate the artist’s colourful imagination. No matter how well we tell this incredible story or try to illustrate it with photos, the full impact of Arthur Villeneuve’s work cannot be captured without seeing the house first hand! Words and images are not enough, you really have to experience the site to understand the strength of its unusual message: the man inhabited by his creation makes it his habitat in the end.