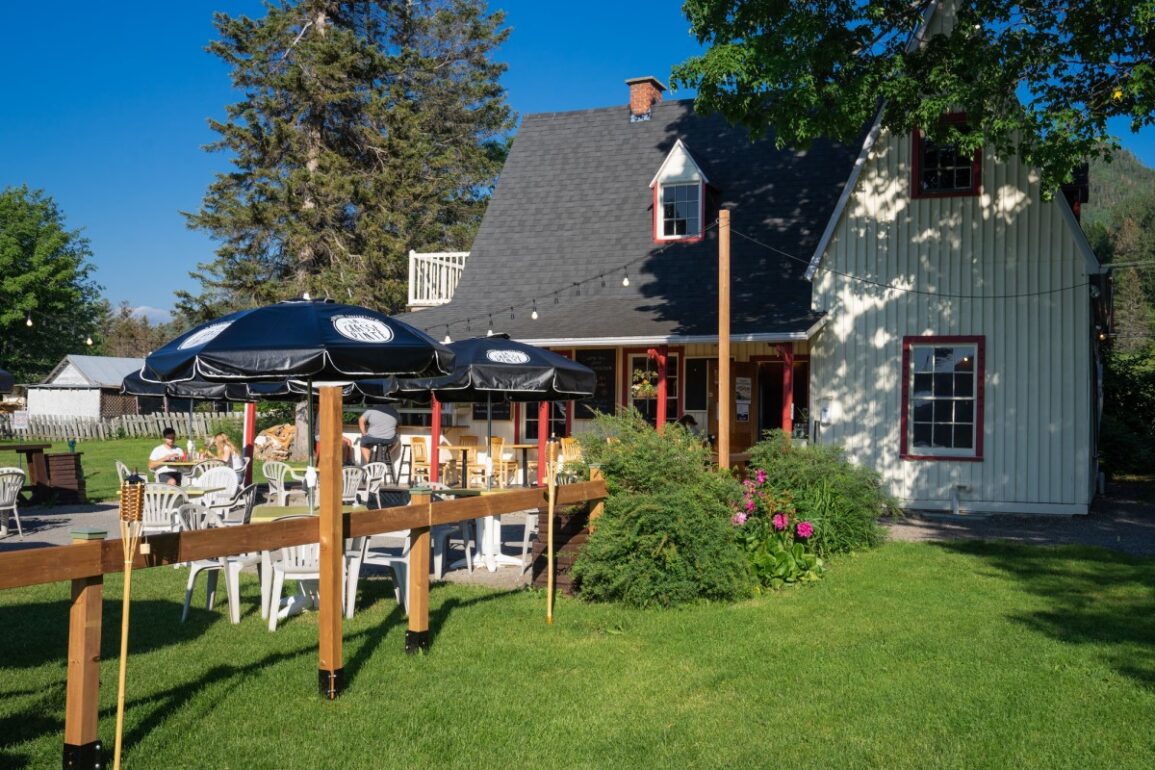 In the scenic but little-known area of Bas-Saguenay stands a building with a rich past. It is now home to the charming Bistro de l’Anse, part of a co-op offering an inviting space to gather, enjoy a beer or take in a show.

The pretty heritage home is nestled in the mountains where the Saint-Jean and Saguenay rivers meet in L’Anse-Saint-Jean. Built around 1860 for the very wealthy Price family, the property once served as a fishing camp and occupies a large piece of land overlooking the river. The patriarch of the family, William Price, made a fortune with his forestry company. He also acquired exclusive fishing rights (a fairly common practice at the time used by the wealthy to reserve the nicest parts of land). Here, he hosted family, friends and prestigious clients, primarily for salmon fishing. The family continued to monopolize that activity until the government abolished private fishing and hunting clubs in 1977, making the land accessible to everyone.

Eventually, the fishing camp was sold and converted into a restaurant, which is run by a co-op today. It’s great to see the community embrace what was a symbol of upper-class privilege for over a century.

Taking back the land

“We initially wanted to start a co-op because it reflected our values, as the primary goal of a co­op isn’t to make a profit. Co-ops target social development and sustainable development,” said Philôme La France. We’ve included that in our statutes and regulations. It was a good fit for us, and it has allowed us to combine social engagement with our financial projects. We have a truly participative approach, focused on rallying people around transforming our local economy.”

Born in the area, Philôme La France has served as mayor of the nearby municipality of Petit­Saguenay since 2017 and is president of the Ateliers coopératifs du Fjord. He tells us how proud local residents are to participate in the town’s projects. (The fact that 300 of the co-op’s 1,000 members are active speaks for itself.)

“The Bistro de l’Anse, the Chasse-Pinte microbrewery and the entire co-op belongs to its members and, therefore, the community,” he explained. “We have a sustainability objective, so our co-op’s practices and intentions will never allow this property to be given up. We want to make sure it remains public property.”

Offering a taste of the region

When you arrive at the restaurant, you’re immediately struck by its beautiful natural surroundings. Once inside, you’ll feel like you’ve gone back in time, complete with creaky floors, worn wood and the scent of a bygone era. The clientele is varied and includes tourists, families and regulars who come to watch a show (the restaurant is popular stop for touring musicians), grab a pint or have a bite to eat. Local ingredients are featured in every dish, from the red deer burger to the balsam fir beer. The Chasse-Pinte microbrewery makes beers (brewed near the restaurant) with identities that are focused on local flavours and colours. This is reflected in how they taste, how they’re named and how they’re labelled (featuring illustrations by Ève Breton Roy).

“We promote northern flavours, which include local forest botanicals as well as regional and Québec products,” said the young mayor. “We really aim to showcase local and regional ingredients through our products and activities.”

In addition to the Bistro de l’Anse, the microbrewery and fishing, you’ll find plenty to do in L’Anse-Saint-Jean and the surrounding area. For example, you can take a hike in the nearby mountains, kayak or sail to the fjord, relax on Saint-Étienne beach in Petit-Saguenay or climb the Via Ferrata routes at the Parc national du Fjord-du-Saguenay in Rivière-Éternité. There’s so much to do that you should plan for a longer stay in order to take it all in.

“Fjord-du-Saguenay is a special place for a host of reasons, but first and foremost, it’s because of the warmth and resourcefulness of its people. People want to live here and put down roots in the community, which makes them exceptional,” said Philôme La France. “It’s a beautiful area with its scenery, fjord, mountains, back country, lakes and nature as far as the eye can see. It’s an amazing place that can be visited year-round, where you can enjoy the wildlife, fresh air, activities and culture in a truly unique setting.”

While people are more familiar with Tadoussac and Sainte-Rose-du Nord, you won’t want to miss L’Anse-Saint-Jean, Petit-Saguenay and Rivière-Éternité. They will give you a feel for Bas­Saguenay and introduce you to a gorgeous tourist region. And who knows? You may be so taken with it that you decide to make it your home.